(Philadelphia, June 6, 2022)––The Philadelphia Orchestra recognized 10 members of the Orchestra for their exemplary contributions in a ceremony at the beginning of the June 5, 2022, concert in Verizon Hall at the Kimmel Center for the Performing Arts. Violinist Davyd Booth was presented with the 2022 C. Hartman Kuhn Award. Retiring and departing musicians David Bilger (principal trumpet), Gloria dePasquale (cello), Steven Glanzmann (librarian), Dmitri Levin (violin), Harold Robinson (principal bass), and James Sweeney (stage manager) were honored after dedicating over 180 years of combined service. Richard Amoroso (violin), Shelley Showers (horn), and Angela Anderson Smith (bassoon) were each recognized for 25 years of service.

Established in 1941 and named for a charter member of the Board of Directors who served from 1901 to 1933, the C. Hartman Kuhn Award is given annually to “the member of The Philadelphia Orchestra who has shown ability and enterprise of such character as to enhance the standards and the reputation of the ensemble.” Music Director Yannick Nézet-Séguin selected violinist Davyd Booth, commending his dedication to connecting the Orchestra with audiences through innovative means. Booth has been a passionate advocate for outreach programs, appearing regularly in the Our City, Your Orchestra digital series. A member of the Orchestra since 1973, he has participated in countless interviews and events about his role in the Orchestra’s historic inaugural tour to China. His exemplary musicianship, authenticity, and enthusiasm have inspired new followers and long-time supporters alike.
About the Kuhn Award recipient:

Davyd Booth joined The Philadelphia Orchestra in 1973. A native of Clarksburg, West Virginia, he made his professional debut at the age of 13. He toured the United States for four years, giving recitals and performing with such orchestras as the San Antonio and Pittsburgh symphonies. At 16 he made a concert tour of Mexico. He studied violin and piano at the New School of Music. Booth was co-music director and harpsichordist for the Amerita Chamber Ensemble, having just retired from the group this past April, and he is active in music education. He is on the faculty of the Temple University Preparatory Department, where he serves as conductor of the Chamber Players Orchestra. He has also served on the faculties of the University of Pennsylvania, the New School of Music, and Rutgers University. Booth was a member of the Philarte String Quartet for 15 years and is currently a member of the Wister String Quartet. Since 1998 Booth has been the harpsichordist for The Philadelphia Orchestra. He also serves as the Orchestra’s second keyboard player and has been featured on piano, celesta, harmonium, organ, synthesizer, and accordion. 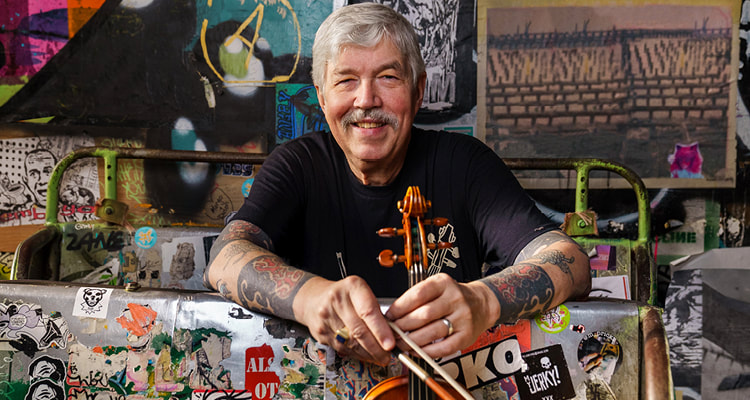 ​About the retirees:
­­­
David Bilger (Marguerite and Gerry Lenfest Chair) has held the position of principal trumpet of The Philadelphia Orchestra since 1995. He received a Master of Music degree from the Juilliard School of Music and a Bachelor of Music degree from the University of Illinois. As a soloist he has appeared with The Philadelphia Orchestra, the Dallas Symphony, the Houston Symphony, the Chamber Orchestra of Philadelphia, the Oakland Symphony, the Indianapolis Chamber Orchestra, and Philharmonia Virtuosi of New York. His chamber music appearances include performances with the National Brass Ensemble, Chamber Music Northwest, the New York Trumpet Ensemble, and Saint Luke’s Chamber Ensemble. Bilger is currently on the music faculties of the Curtis Institute of Music, Northwestern University, and Temple University, and he is a visiting guest artist at the Peabody Institute of the Johns Hopkins University. He has performed master classes at dozens of institutions, including the Juilliard School of Music, Indiana University, the University of Michigan, the Manhattan School of Music, and the Peabody Conservatory.

Gloria dePasquale (Orton P. and Noël S. Jackson Chair) joined The Philadelphia Orchestra’s cello section in 1977 at the invitation of Eugene Ormandy. Born in Evansville, Indiana, she credits the public-school music program of her hometown for her introduction to the cello. She graduated with honors with both her Bachelor of Music and Master of Music degrees from the New England Conservatory of Music in Boston where she was a student of Stephen Geber. She is an advocate for music education both at The Philadelphia Orchestra, where she chaired the musician Education Committee, and in the Philadelphia Youth Orchestra (PYO), where she is artistic advisor, director, and conductor of Prysm Strings and director of the PYO College and Conservatory Audition Preparation Program and the PYO master class and sectional program. DePasquale maintains a large private studio and runs monthly master classes and performance classes for her students. She also teaches for the New York State School of Orchestral Studies in Saratoga Springs, New York, every August and is on the faculty of the Luzerne (New York) Music Center and the Philadelphia International Music Festival.

A native of Philadelphia, librarian Steven Glanzmann began playing trumpet at age nine, then arranging and composing in his teens. In 1987 he began studying music education at Penn State University (PSU). While concentrating on music education and jazz studies, he became manager/librarian for the PSU Wind Ensemble. He graduated from PSU with a Bachelor of Arts degree in Integrative Arts and later attended West Chester University for graduate studies in music theory. In addition to working for the Curtis Institute of Music as a music cataloger, Glanzmann worked for the Philadelphia International Music Festival for five summers. From 1991 to 1999 he worked for J.W. Pepper & Son, the European American Music Distributors Corporation, and the music rental department of the Theodore Presser Company. After serving five years as a part-time intern/staff librarian for The Philadelphia Orchestra, he became a full-time librarian in 2003.

Violinist Dmitri Levin was born in the Soviet Union in the city of Minsk and studied at the School for the Musically Talented before entering the famed Moscow Conservatory, where he was a student of Yuri Yankelevich. After completing his studies, he served as principal second violin with the Minsk Opera and Ballet Theater. Levin emigrated to the United States in 1977 and joined the Pittsburgh Symphony in 1979. During his tenure there, he served as co-principal second violin for two seasons and gave two solo appearances with that orchestra. He joined The Philadelphia Orchestra in 1984 and participated regularly in the Orchestra’s Chamber Music Concerts.

Harold Robinson (Carole and Emilio Gravagno Chair) joined The Philadelphia Orchestra as principal bass in September 1995. He previously served as principal bass with the National Symphony from 1985 to 1995 and also served as assistant principal bass of the Houston Symphony (1977–85) and principal bass of the New Mexico Symphony (1975–77, then known as the Albuquerque Symphony). A prizewinner at the 1982 Isle of Man Solo Competition, he has performed concertos with The Philadelphia Orchestra, the Houston Symphony and Houston Pops, the New York Philharmonic, the American Chamber Orchestra, and the Greenville (South Carolina) Orchestra. A native of Houston, Texas, Robinson studied at Northwestern University and the Peabody Conservatory. He is currently the bass instructor at the Curtis Institute of Music and has given recitals and master classes throughout the United States, Korea, Japan, and Europe.

James J. Sweeney, Jr., has been a stagehand with the Orchestra since 1991; he became stage manager in 2018. His family has been involved in the theater business for four generations. His grandfather was a founding member of I.A.T.S.E. Local 8 in Philadelphia and his father worked as a stagehand with The Philadelphia Orchestra for 30 years, until 1990. Sweeney graduated high school in 1974 and started working part-time as a stagehand. He enrolled at Penn State University, and while there, was offered a full-time position at the Academy of Music and decided to leave school to pursue a career in the theater business. He served as an assistant electrician and then as an assistant carpenter from 1976 to 1991, at which time he was hired by the Orchestra.

About the 25th anniversary celebrants:

Richard Amoroso (Robert and Lynne Pollack Chair) joined The Philadelphia Orchestra after serving as a member of Concerto Soloists (now the Chamber Orchestra of Philadelphia), Peter Nero and the Philly Pops, and as a substitute violinist with the Orchestra. He has performed as soloist with Peter Nero and the Philly Pops, the North Penn Symphony, the Helena Symphony, the Southeastern Pennsylvania Philharmonic, Philadelphia Youth Orchestra, and the Cairn University Orchestra, and at Carnegie Hall’s Weill Recital Hall. At the age of 14, Amoroso won The Philadelphia Orchestra’s Student Competition (now the Albert M. Greenfield Competition) and subsequently performed as a soloist with the Orchestra. A native Philadelphian, he attended Settlement Music School and also studied with Philadelphia Orchestra retired Concertmaster Norman Carol, as well as with former Orchestra Co-Concertmaster William dePasquale, Rafael Druian, and former Orchestra Associate Concertmaster David Arben. Amoroso holds a bachelor’s degree from Dickinson College.

Shelley Showers became a member of The Philadelphia Orchestra after serving as acting principal horn of the Cleveland Orchestra and principal horn/soloist of the Utah Symphony. She began her career with the New Jersey Symphony and then as acting associate principal horn of the Cincinnati Symphony. A native of Lancaster, Pennsylvania, she earned her Bachelor of Music degree from the Curtis Institute of Music. She has participated in the Deer Valley International Chamber Music Festival, the Nova Series, the Utah Music Festival, the Aspen Music Festival as principal horn and faculty member, and the Kent/Blossom Music Festival as a faculty member and chamber musician. She has served on the faculties of the Cleveland Institute of Music and Philadelphia Biblical University and is currently on the faculty of the Temple University School of Music, where she is a member of the Conwell Woodwind Quintet. Showers served as a member of the Board of Trustees of the Curtis Institute of Music as Alumni Council representative; she also served on the Annual Fund, Development, and Student Life committees. She is currently a member of the Board of Philadelphia Orchestra Retirees and Friends.

Bassoonist Angela Anderson Smith’s previous orchestra memberships include the San Jose Symphony, where she served as second bassoon, and the San Antonio Symphony, where she was assistant principal/second bassoon. She frequently performed in the Philadelphia Orchestra Chamber Music Series, and she is a member of the Network for New Music and the Conwell Woodwind Quintet, an ensemble made up of Temple University faculty members. She has won prizes at such competitions as the Carmel and Coleman chamber music competitions, and she has participated in the Yale Summer School of Music and Art, the Music Academy of the West Summer Festival, and the Midsummer Mozart Festival, where she was second bassoon in the Festival Orchestra for two seasons. Currently a faculty member of the Boyer College of Music and Dance at Temple University, Smith has previously taught at the University of Texas at Austin, the University of Santa Clara, and Southwest Texas State University. She received her bachelor’s degree from the University of New Mexico and her master’s from the University of Southern California.