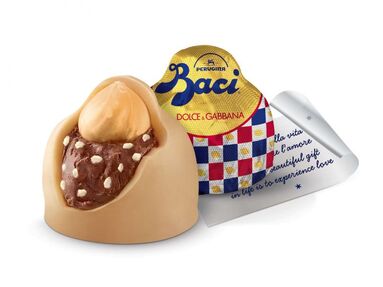 A genuine Made in Italy love story, Baci Perugina marks 100 years with a special limited edition chocolate.
Italian luxury fashion house Dolce & Gabbana celebrates one century of Baci Perugina by designing a limited edition set of packaging for the hazelnut-centered chocolates.
The Perugina chocolate confectionary company, based in the central Italian city of Perugia, is marking the milestone by launching a special edition of 'Dolce Vita' Baci, "dressed" by Dolce & Gabbana.

The new recipe, released ahead of Valentine's Day, has a lemon-flavored center and is coated by white chocolate with a hint of vanilla.

The story behind the much-loved Baci begins in 1922 with fashion designer and entrepreneur Luisa Spagnoli who came up an innovative idea for a new recipe of chocolates.
Spagnoli devised a combination of chopped hazelnuts and melted chocolate to create a creamy filling, topped with a whole toasted hazelnut, and encased in dark chocolate.
The irregular shape reminded Spagnoli of the knuckles of a fist, leading to the chocolate's rough-sounding original name, "Cazzotto", meaning "punch" in Italian.
This didn't sound right to Giovanni Buitoni, the young manager and son of Perugina co-founder Francesco, who softened the name to "Baci", reasoning that people would prefer a kiss to a punch.

Buitoni and Spagnoli - who was 14 years his senior and was married to one of his father's partners - were secret lovers.

Subsequently the Perugina art director Federico Seneca had the idea of inserting romantic phrases inside the foil-wrapped chocolates.
According to legend, the love notes idea was inspired by the secret handwritten messages, hidden in chocolates, exchanged between Buitoni and Spagnoli.
Seneca then devised the blue and silver box depicting the couple kissing under the stars, inspired by the painting The Kiss by Italian artist Francesco Hayez‎.

The combination of the recipe, name and packaging proved a winning formula and Baci became immensely popular, with Perugina boasting in a 1927 advert: “In just five years, Perugina has sold 100 million Baci”.

A century since the creation of the classic chocolates, the Perugina company, now owned by Nestle, says that 1,500 Baci are made every minute, exported to 55 countries around the world, with half a billion "kisses" sold each year. 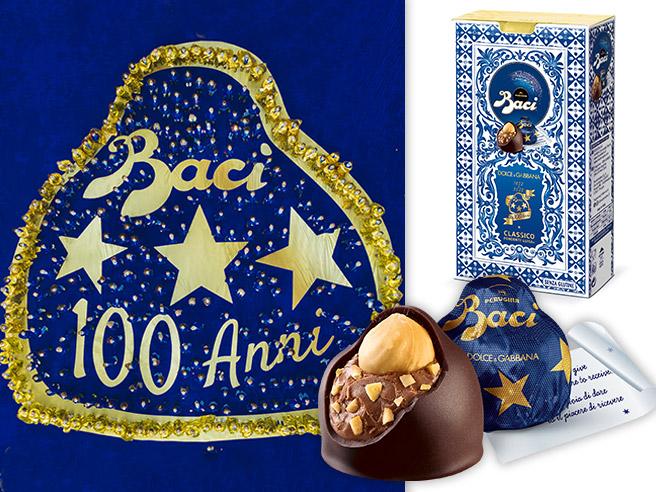