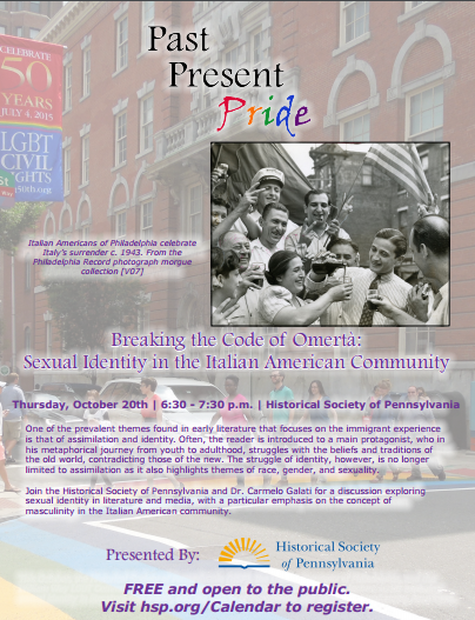 Breaking the Code of Omertà:
Sexual Identity in the Italian American Community

Where: The Historical Society of Pennsylvania, 1300 Locust Street, Philadelphia, PA 19107

Registration link: https://goo.gl/JDU4Vu
​
Description: One of the prevalent themes found in early literature that focuses on the immigrant experience is that of assimilation and identity. Often, the reader is introduced to a main protagonist, who in his metaphorical journey from youth to adulthood, struggles with the beliefs and traditions of the old world, contradicting those of the new.  However, the struggle of identity is no longer limited to assimilation as it also highlights themes of race, gender, and sexuality.
This presentation focuses on sexual identity in literature and media, paying particular attention to how the idea of Italian American masculinity is presented to an Italian American community and how it challenges and hopes to promote inclusiveness in a culture that is often plagued by old-world values. Case studies will include Mario Puzo’s The Godfather (1969), Robert Ferro’s The Family of Max Desir(1983), Felice Picano’s Ambidextrous: The Secret Lives of Children (1985), Peter Covino’s “The Poverty of Language” (2000), David Chase’s The Sopranos (2006), Andy Cohen’s The Real Housewives of New Jersey (2009) and Tina Fey’s The Unbreakable Kimmy Schmidt(2016).

Speaker's Bio: Carmelo Galati is and Assistant Professor of Italian and Core Coordinator of the Italian program at Temple University where he has taught numerous courses on the Immigrant Experience in Literature and Cinema. He earned his BA in English Literature and Italian in 2003 from the University of Pittsburgh. He received his Ph.D. from Rutgers University in 2011.  His research takes an interdisciplinary approach towards Dante and Medieval Studies by focusing on their adaptation and appropriation in modern and postmodern literary and popular culture.